Sea Levels Are Rising And So Are We: Drowned Worlds In Children’s Fiction

Posted in Author/Illustrator Posts on Mon, 12 July at 2.45 pm 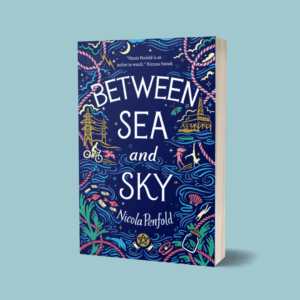 Between Sea and Sky is set in an imagined future, after sea levels have risen and many species have died out. On the flat south east coast of England, a small mainland population lives in a concrete and metal compound, built on stilts to protect it against flooding. The cooling tower of an old coal fired power station grows stacked rows of salad and vegetable plants, in artificial solutions and light. And vast fields of solar panels and pylons stretch inland, sending valuable electricity to the governing Central District.

Out at sea, a small family – one dad, two sisters – make their living on a ramshackle old oyster farm. A rusted cruise liner, now a prison ship, takes anyone who clocks up too many civil disobedience points on the tightly controlled mainland, where rules and restrictions are a way of life. This is my vision of a drowned Earth.

I’ve always been drawn to post-apocalyptic worlds. A small group of survivors in a changed landscape. One of my favourite books growing up was Children of the Dust by Louise Lawrence, set in the aftermath of a nuclear war. It’s bleak reading now, going back to it all these years later, but at the time I adored it.

Where the World Turns Wild, my first book, was set in a world after a pandemic had locked people in cities, away from the natural world. Between Sea and Sky is post climate change and biodiversity loss (these crises come hand in hand). It’s a scary vision, but the statistics are scary too. Sea levels are thought to have risen 16cm since the start of the twentieth century, but by far the biggest rises have been in recent decades. Levels are thought to be rising 3.6mm a year, and this is predicted to get faster still. If you go to https://coastal.climatecentral.org you can see what areas will be underwater by when, unless we take drastic action, and not only stop churning out greenhouse gases, but invest in solutions to reabsorb them.

I’m not of course the first children’s writer to write a flooded future. Marcus Sedgwick’s Floodland came out in 2000 and this short, brilliant, visionary book is still used regularly in schools. East Anglia is underwater and survivors live precariously on tiny newly formed islands, like that of Ely Cathedral (‘Eeels Island’). In a world of rival tribes, everything has become about survival.

Marcus Sedgwick said recently, writing on a new Climate Fiction League website, set up by writer Lauren James, that “just because we might think something is well-known, accepted scientific fact, doesn’t mean everyone does… That’s why it’s very important that we continue to speak (even at risk of boring ourselves) about the vitally important matters that need to change in the world – in this case, climate change. And of course, the best way to do this is to work with younger people.”

Fiction can show futures we want to avoid. But this material is not just futuristic. In Swimming Against the Storm by Jess Butterworth, Eliza and her sister Avery live in a fishing village in the bayous, the swamplands of Louisiana. This is an area under massive threat from rising sea levels and subsidence. It’s estimated that a football field of coastal wetlands is lost every hour into the sea in Louisiana. Swimming Against the Storm brings into sharp focus what this means, for this vitally important habitat, so rich in biodiversity that it sings with life in the book. And for the communities that live here, and make their living from the shrimp and oysters which have traditionally been so plentiful, the sadness at what’s being lost is palpable. The book draws attention to the added stresses that oil and gas companies are putting on the bayous, as they dig out new canals.

Bren McDibble is a New Zealand writer living in Australia, whose books have featured a world without pollinators (How to Bee), a world after a wheat fungus has destroyed cereal crops and caused famine (Dog Runner) and her own vision of a drowned world (Across the Risen Sea). I asked Bren why she chose this last topic.

“Sea inundation is a process that’s already a very real threat to so many cities around the world. By setting a story after a global sea rise event, I get to create a survival story in a new world. Seeing our world breaking up is now our scary daily news and I like to look beyond that. What comes next? I feel it empowers young readers to cope with an environmental topic if I focus on the survival and show characters thriving in a new (but changed) world.”

Across the Risen Sea pushes a message about low-impact lives – “living gentle lives” that will appeal to environmentally conscious readers (most young people today!). But I loved the playfulness too, and the inventiveness, in which this new world is rendered. There is a scene where the main characters, Neoma and Jag, climb the stairwells of a flooded office tower, its top floors poking out of the water. They’re looking for salvage. And in the book’s opening pages, the head of a baby doll, home to a hermit crab, clambers over sea walls made of old car frames. They live in ‘Rusty Bus’. These kinds of details were some of the things I most enjoyed writing in Between Sea and Sky – seeing what’s left of our world and what the characters make of it. One of my characters, Pearl, collects washed up broken dolls, and remakes them as mermaids, to release back into the sea. Her sister, Clover, tightropes the backbone of a beached whale skeleton.

It’s a fine balance sometimes, writing something intriguing and inviting, a world where readers want to spend time, and sounding the alarm call loud enough. I was writing Between Sea and Sky last spring. We were all in COVID lockdown, and it felt important to pack the story full of hope. Hope comes in two forms in the book. My child characters who notice things adults are too busy and worn down to see. And the natural world, which has so much capacity to heal and help us, even now, after we’ve done so much to destroy it. I’m going to finish with a climate strike placard one of my daughters made last year. I hope we swim! 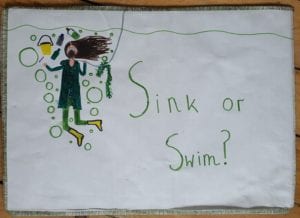 For other drowned worlds in children’s fiction try:

Orphans of the Tide by Struan Murray

The Gracekeepers by Kirsty Logan