Me and the Robbersons. A gift of love to my son. Siri Kolu.

Posted in Author/Illustrator Posts on Thu, 10 June at 4.47 pm 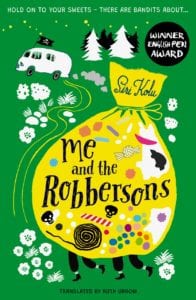 Why is Me and the Robbersons fun and whimsical? It is my gift of love to my son. The book started as a bedtime story for my five-year-old Martti, who felt that the world of brave fairytale heroes and Pixar characters was no longer for him. He commissioned me to write a story better suited for him. He wanted a tailored story, a story to fit him perfectly, with an ordinary child at the centre. No heroes, no superheroes, just a child. He also wanted the main character to be a girl.

I felt it was heart-warming that my son wanted to connect with me through a story. That sounds good, I said to my son, sure I could do this. Then I asked, “any more requests?” At that point my son was five, I had published my debut novel for adults and was working as a dramatist and as a script doctor. In short, I trusted my writing and I felt safe asking that.

Lesson of the story – if you want a real challenge, ask for requests from a five-year-old.

1) Fast cars chased by other cars, driving at high speed on winding roads.

2) Children high in tree tops, spying on the cars with binoculars. And these kids should be funny and clever and talk in a code language.

But my son wasn´t quite finished. The most important thing still was missing from the list…

3) Candy! LOTS of candy. All the kinds of candy you can find. Pix ’n’ mix for sure. Lollies. Chocolate bars. Cotton candy. All sorts of candy. In enormous quantities, the largest amount of sugar-coated treasures I could possible invent. Anabundance of candy.

“Are you sure you got this right, Mummy?” my son asked with a worried look. “Are you writing it down? You can’t mess this up or you will spoil the story.” And since I am a grown-up with a “worn-out brain”, he instructed me once more. “Not the amount of candy for adults”, he added. “Not like a box of Tic Tacs. I mean the Serious Candy Business. I mean the candy feast for the kids, the candy professionals.”

Then it slowly sank in.  I knew nothing of this – I was a rookie. And I was in deep deep trouble.

But I learned. I started working on the story. I wrote and rewrote it and my son was the world’s harshest editor. “The boring bits” from the text needed to be deleted. “We leave just the yummies.” So we did. That was my second time at writing school twice and it made me the writer of children’s fiction I am today. I think it made me a better Mum as well. Now I know the candy business is Serious Business.

The story my son commissioned is called Me and the Robbersons. As of 2021 the book has been translated over twenty languages. The bandits in my story have run to countries like South Korea, Russia, Spain and Germany. I wrote about a funny bandit family who steal young Maisie to be a friend for their robber kids, but in fact the bandits stole me too! In Scandinavia I am called the Robber Mother. I have written a decade’s worth of bandit stories and seen them come to life in a film and in several plays for stage. I have created a bandit cook book, some bandit family games and quizzes. Even though I have a serious fear of flying, I was (before Covid-19) flying around Europe to meet the readers of the bandit story.

The best bit is that I receive some “Interesting Mail”, as my kids call it. I get lovely drawings of bandit vans and photos of pets, named after Maisie or Charlie of Wild Carl!

I need to make a confession. I think I am no longer an adult. I might be a ten-year-old in an adult-looking body! And I think I love it. Writing Me and the Robbersons changed me for the better. It changed my life, and I owe it all to my son. 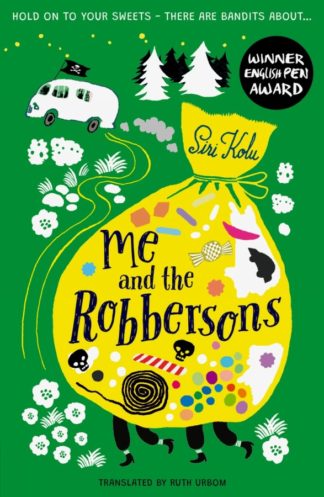 Me and the Robbersons

Hi, it's Matilda Woods again, author of The Night

For all your budding illustrators out there! Joi